Nearing the final weeks of 2020, the SP500 sits near 3725, within spitting distance of our 3800 year-end target that we have discussed since early May. We will stick to the first half of 2021 in this piece and recap 2020 in a few weeks, once the year is finalized.

In July of this past year, in our second half 2020 outlook, we stated that “the math behind the stock market, hidden in option pricing, says that 3700+ on the SP500 is likely in the first quarter of 2021. If markets can regain their Federal Reserve induced calm post-election, one can even get a blow-off 4000+ S&P 500 target in first half 2021 as the economy accelerates off easy comps, job and wage growth accelerate, capital investment returns, and money flows back into stocks.” All those targets remain valid, while the timing has been pulled forward a bit due to fiscal stimulus.

We continue to see accelerating, short term, upward movement into the early part of first quarter of 2021 with above 4000 on the SP500 possible. If pressed, our work shows a move above 4000 into late January and early February is possible, but unsustainable.  That is how these moves usually end short term – exponentially. The current move up started from its October 28th-30rd “pre-election” pivot upward. Moves like this tend to last almost exactly 3 months, and they tend to move exponentially up over the last 3-4 weeks of their moves as greed kicks in.

These moves are almost always led by the existing year’s leadership. This year, it’s a combination of stay-at-home stocks, growth at any price stocks, and cyclical stocks that are leading into year end. This is because the inflation component of interest rates started re-accelerating then, at the same time the real growth component of interest rates peaked and rolled over.

However, and this is a big however, should this accelerating upward move toward 4000-50 occur over this short time frame, we would expect the chances of a very rapid correction of 10.5-12% down back to 3550-3650 over only 3-4 weeks in February or March to increase.  This could be the “buy and mold for 2021” investors should be wanting. It’s easy to be brave and greedy when things are green, but the best percentage returns are made deploying capital when volatility spikes higher short term, and then subsequently stepping back and letting time and the historic nature of a growing economy take over for your investments.

If they occur, the net of the two moves would leave us pretty much flat with Thanksgiving just a few weeks ago.  Why could we roundtrip back down those levels?  We can’t give an exact reason, but a few of the likely pressures would be:

And should that correction happen in mid 1st quarter, what would the right move be for the rest of the 2021?  For some investors, it would mean being more aggressive when others are fretting about COVID-19 outcomes, economic uncertainty and other factors.  Why? Because as the title of this piece says, “You ain’t seen nothing yet”.  Our current full year-end 2021 upside stands at 4600. Numbers even above that are possible if things get silly in the economy and the markets as the re-opening accelerates in 2nd quarter through year end.

Very early 2021 should see a continuation in the general “it’s time to play offense” theme. By playing offense, we mean that we might expect asset classes such as small capitalization stocks, international, and emerging market stocks, and sectors like technology, consumer discretionary, industrial, and financial stocks to perform strongly relative to other sectors and asset classes, while sectors such as utilities and staples could continue to lag on a relative basis to other sectors and asset classes. 4th Quarter 2020 earnings should be strong and well-received.  However, there could be a mid-1st quarter air-pocket on inventory build worries or economic slowdown worries with the new strain of the virus.

First, we will share with you several charts. The first is one about V-Bottoms in the economy and markets.  The second chart is one that shows that historically early bullish sentiment readings or “overbought” readings in the markets are not meaningful for predicting bad returns going forward. 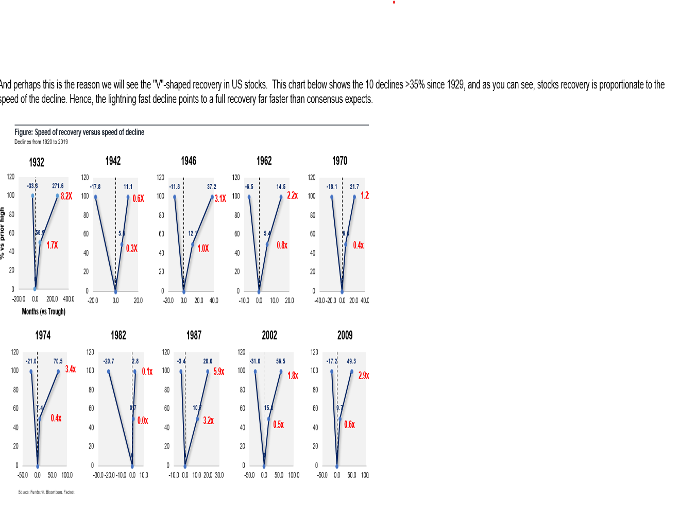 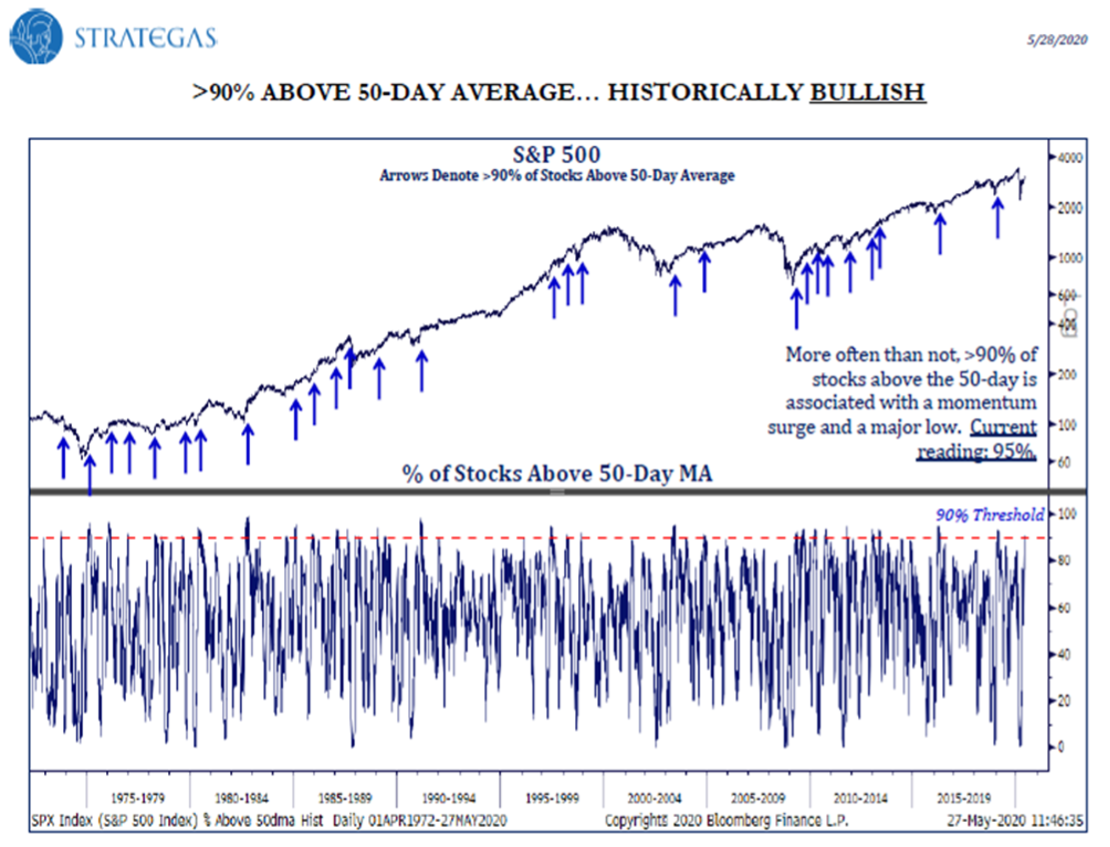 Throughout 2021, heavy monetary and fiscal stimulus will continue with historic Federal Reserve monetary policy and the additional $900 billion in fiscal stimulus out of Washington, D.C. that was recently passed to combat the virus. The accompanying chart of the Federal Reserve balance sheet versus the S&P 500 shows the strong direct correlation, the last 8 years between Fed monetary support and the S&P 500 this cycle. 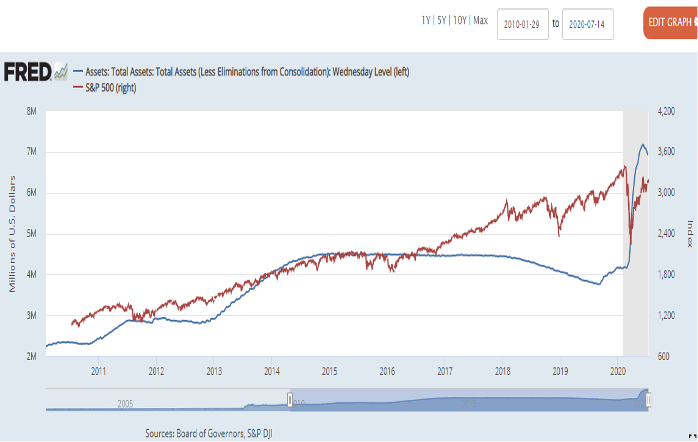 As our science against the virus, in the form of vaccines and viral agents, are distributed throughout the first half of 2021, investors are likely to become more emboldened for the 2nd half of 2021 with economically sensitive stocks likely to regain favor.

The last 4 weeks there has been much talk on financial news networks and social media about investor euphoria and investor sentiment being “extreme”.  While sentiment is clearly better than pre-election 2nd and 3rd quarter 2020, it has not reached critically extreme levels on our work.  “Speculative” moves in the markets usually end with exponential moves. We are not there yet.

Remember that sentiment is a combination of investors past positioning in stocks (how long they are or are not), of what people have done with their money the past few months (bought more stocks or raised cash), where they currently are positioned (are they happy with their current allocation?), and where they plan to go with their money over the coming months and years (do they feel compelled to buy or sell stocks?) Let us look at those things for a few minutes.

We have some stats and charts from our friends at FundStrat. First off, what happened in the virus-induced downturn?  What did investors do with their money?  Let us look at data from Fidelity Investments, who manages almost $2.5 trillion in assets directly, monitors almost $7 trillion in total assets, and touches over 32 million clients.

According to Fidelity, 30% of Baby boomers went 100% to cash on the way down or near the bottom in the late first quarter decline.   You heard that right, 30% of people over the age of 60 sold all their equity holdings.  Not only did they sell stocks, but according to Fidelity, they have not bought back their positions. 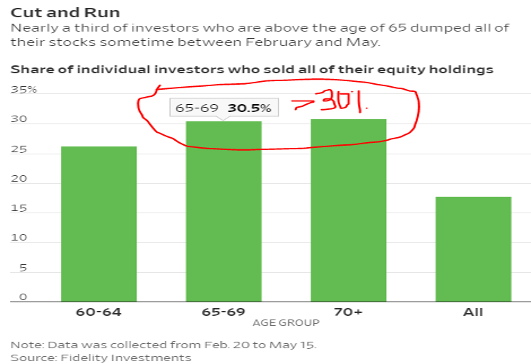 With the equity markets now at all-time highs, it is an emotional, tricky, and painful decision for these investors to “get back in”. Money flows into equities have shown a rapid uptick since Mid-November on the back of the election concerns calming.  However, positive flows into stocks, like we are currently experiencing, usually last 12 to 15 months, not 12 to 15 weeks.  Moreover, there is a continued steady stream of money and savings going into cash and bonds.  Many are still playing defense. 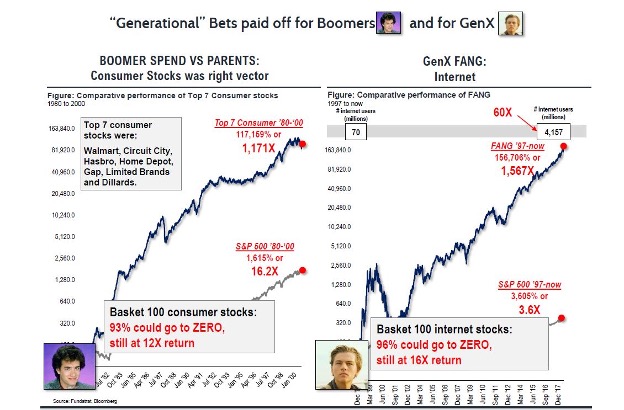 With the markets much lower, if one looks at the 3 worst economic contractions since 1900, the average equity rally is up 331%!  Yes, you read that correctly.  Post-recession, the 3 worst recessions America has experienced the past 120 years, the average combined return during the next expansion was over 325%. 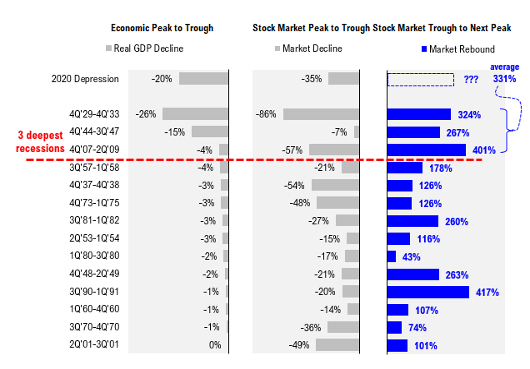 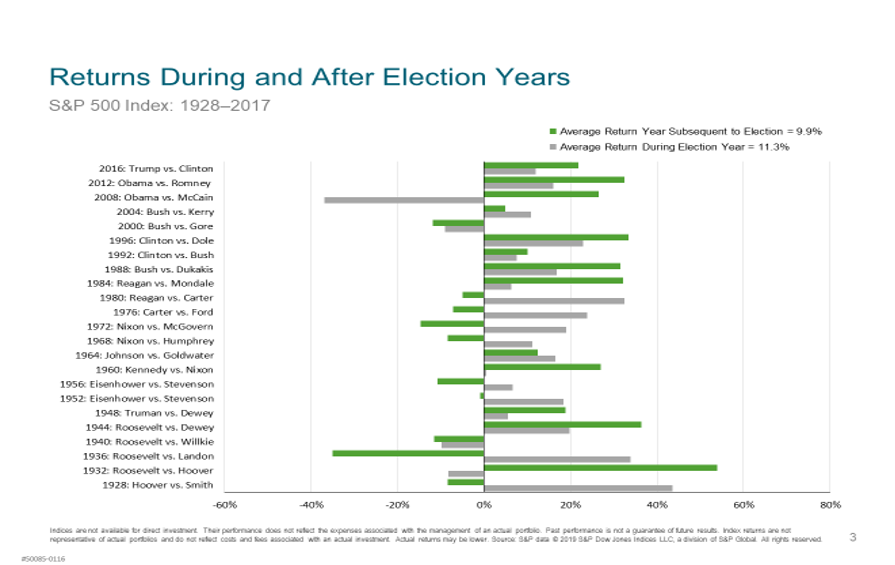 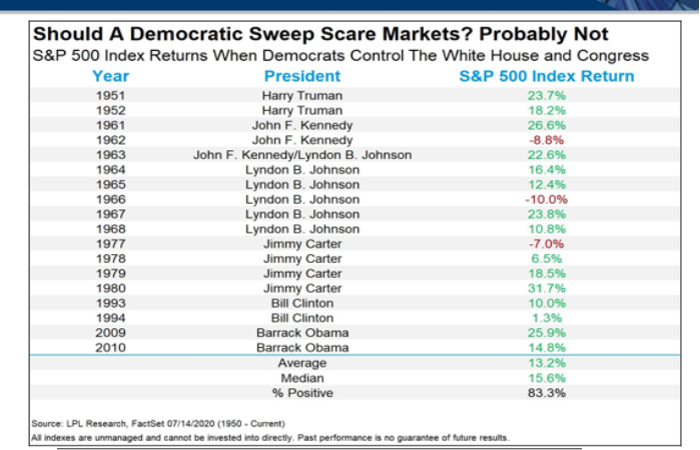 Which brings us to the conclusion of this Outlook.

Targets on the S&P 500? The first half of 2021 can reach highs close to 4000 or even higher if we can get volatility near 20 on the VIX index. However, we repeat once again, if these levels are achieved early in the first quarter, the market could potentially retrace most of those gains.

As for second quarter 2021 and beyond? Well, we are in a bull market. Given the lag affect of Federal Reserve monetary policies on economic growth and inflation, we expect a positive pickup in both in the second half of 2021. Yes, our view agrees with Jeremy Seigel’s side early call for an upturn in inflation, finally. In examining real interest rates, we can see that their declines this cycle have been almost exactly 2 years peak to trough, to the week. The decline in real interest rates from 2010 through late 2012 took almost EXACTLY two years. It lagged the first round of Quantitative Easing initiated in 2010. The latest round of declining real growth started when Fed Chairman Powell made his mistake in November of 2018 and stated he was “not even being close to done tightening monetary policy”. In our view, do not expect him to utter any hawkish statements on interest rates unless, we have a short-term exponential move in stocks over a 3-to-4-week period.

At Oak Harvest, we look for value when others are fearful.  Moreover, we try to accelerate investments when other investors’ emotions and panic cause short term volatility.

This concludes our first half outlook.

Though all data and information included in this outlook is believed to be accurate as of the time of publication, it is not guaranteed and no assurance of its accuracy is provided. Nothing in this forecast should not be considered personalized investment advice. All charts, indicators, or graphs included or referenced in this content have limitations. No such material is able, in and of itself, to provide a buy or sell recommendation for any security. Strategies discussed will not apply to all client accounts or portfolios. No assurance is made that Oak Harvest Investment Services will continue to hold the views expressed herein. Views and opinions may change based on new information, analysis, or reconsideration, and without notice. . Not all past forecasts or projections were, nor future forecasts and projections may be, as accurate as any forecast discussed. Oak Harvest makes no assurance as to the accuracy of any forecast or projection made. Investments or strategies mentioned may not be right for you. Direct investment in an index like the S&P 500 is not possible, and returns of an index like the S&P 500 will not reflect the costs associated with an actual investment portfolio. Returns of an index will not reflect the results seen in your portfolio and your results will differ. Any investment strategy depends on your personal situation, risk tolerance, and objectives and should be undertaken after consulting with your financial advisor.  Past performance is not indicative of future results. Investing involves the risk of loss.