The 10 Best Places To Retire In Texas 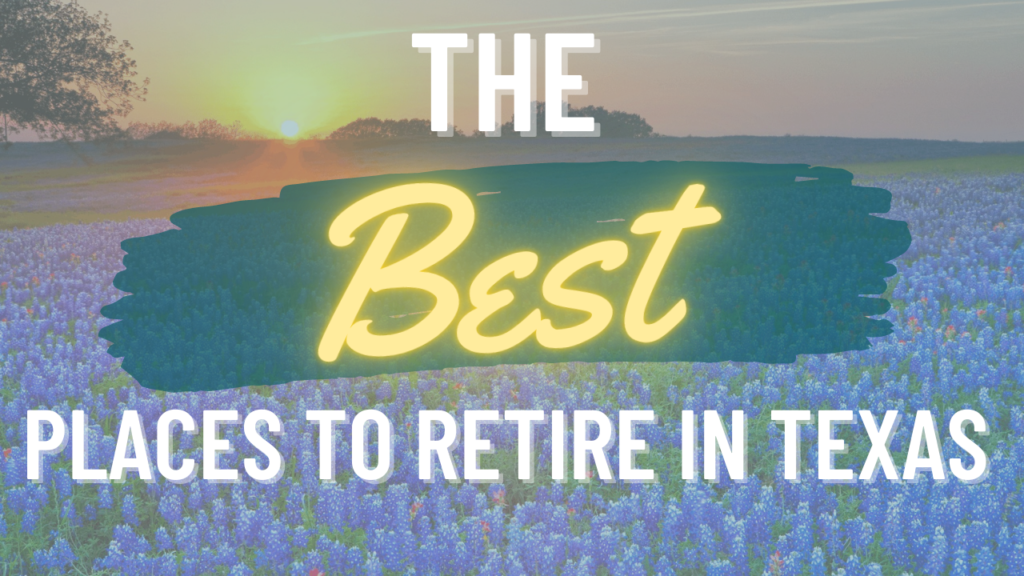 Texas is the second largest state in the U.S. after Alaska and it is very attractive for people planning to retire. One of the reasons it’s a common choice for retirees, is the tax advantages the state offers. There is no individual income tax and no state property tax making Texas appealing! In addition, Texas’s warm weather and mild winter temperature make it an obvious choice for retirees not to fight the cold in northern states. There are multiple options to choose from when deciding on the city you may want to consider moving to. We have compiled a list of the ten best places for you to consider spending your retirement years. The key factors we will look at are the cost of living, housing prices, crime rates, proximity to other big cities, medical accessibility and entertainment.

Cost of living for retirees: 2% above the national average

Dallas is one of the most popular destinations for retirees as the city has most everything you could think of! You can find the best healthcare options that are easily accessible. The variety of restaurants and entertainment options are impressive! If you’re a sports fan, you won’t get bored here since Dallas is home to six major sports teams – football (Dallas Cowboys), basketball (Dallas Mavericks), baseball (Texas Rangers), hockey (Dallas Stars), soccer (FC Dallas), and women’s basketball (Dallas Wings). If you’re interested in art, the city offers a large selection of museums and is a great place to be involved in the community. But the best part is Dallas allows for affordability due to lower housing prices for such a large metropolitan area. Dallas would be a fantastic choice to consider spending your retirement years, living close to ways to stay active.

Cost of living for retirees: 10% below the national average

El Paso has consistently ranked as one of the most cost-effective places to retire. The primary reason is the affordability of houses, considered one of the lowest in the U.S. The cost of living here is very reasonable, making El Paso even easier on the pocket book. The city also offers access to high-quality healthcare options that are rapidly expanding. El Paso is home to the largest urban park, the Franklin Mountains State Park, and a variety of botanical gardens. Also, the city offers a variety of festivals for people who like being part of the community and enjoy outdoor activities. Events like KLAQ International Balloon Fest, Ice Cream Fest, El Paso Folk Festival, and Sun City Beer Craft Fest happen in El Paso each year! Other activities in the city include museums, theaters, and golf courses. El Paso could just be your retirement haven!

Cost of living for retirees: 24% below the national average

McAllen is also considered to be one of the most affordable cities to retire in. Even retirees with modest income can buy a house here without spending all their retirement savings. In addition, McAllen’s large metro area makes it easy to commute to other nearby cities like San Antonio, which is only 4 hours away. As for entertainment, McAllen has lots of interactive exhibits in the International Museum of Art & Science and local history displays in McAllen Heritage Center. If you’re a birdwatcher, you will find McAllen especially attractive because of the Quinta Mazatlan World Birding Center.

Cost of living for retirees: 14% lower than the national average

Richmond is a small city in the great state of Texas, but has a lot to offer. The community is  rapidly growing, and there are a lot of amenities for retirees here, such as walking trails, parks, and public libraries. Richmond has a wide variety of restaurants and dining places for foodies at heart. One of the main attractions of Richmond is Fort Bent Museum which is considered one of Texas’s best local history showcases. Various exhibits and events are hosted at the museum, along with guided house tours. The city is also located just 15 miles from the large city of Houston, which makes healthcare more accessible, and access to unlimited activities.

Cost of living for retirees: 4.9% higher than the national average

Granbury has a bit higher cost of living, but just might be worth it in order to access amenities that retirees desire. The population of Granbury consists of over 30% seniors, making it a lovely community for people approaching retirement age. Golden-agers can enjoy walking and biking on natural trails throughout the Acton Nature Center where the landscape is simply breathtaking! In addition, the city is just an hour away from Dallas and has many recreation and entertainment options, such as a variety of museums and musical venues and golf courses. Not to mention the magnificent Granbury Lake is right in the heart of Granbury, where there are all kinds of water activities – fishing, boating, water skiing, and wakeboarding for those adventure lovers.

Cost of living for retirees: 12% lower than the national average

Kerrville is attractive for retirees because of its lower cost of living and very low crime rate. It’s located 60 miles northwest of San Antonio, which can provide access to a large city with many amenities to take advantage of. The Guadalupe River that passes through the town gives it additional options to enjoy. Kerrville is famous for its gorgeous parks, such as Kerrville-Schreiner Park, Flat Rock Park, and Louise Hays Park, located alongside the river. Kerrville also has a lot of entertainment options, such as theaters and museums. If you are into music, it would be joyful to watch a performance by the Kerrville Symphony Orchestra or visit the Kerrville Folk Festival. Unfortunately, Kerrville does not have golf courses, but they can be found within driving distance just outside the town.

Cost of living for retirees: 6.5% higher than the national average

Johnson City is most famous for its wineries and has been very appealing to retirees who enjoy a slower pace of retirement, noting its smaller size of population. Despite a bit higher cost of living, it is still a desirable place for retirement because of its low crime rate and proximity to health and recreational facilities being just 48 miles west of Austin. It’s quite popular among wine enthusiasts, and the best Texas Hill Country Wineries can be found here, along with breweries and a great selection of restaurants. One of the main attractions is the Pedernales Falls State Park which offers camping close to the Pedernales River, hiking, horseback riding, and bicycling for those that enjoy the outdoors.

Cost of living for retirees: 1.9% higher than the national average

Fredericksburg is located just 78 miles west of Austin. Many retirees choose this city to settle in as 31% of the population are seniors. The cost of living is slightly higher than the national average, but it offers easy access to doctors and high-quality healthcare. It is known as a wine country; therefore, hundreds of wineries can offer wine tastings, tours, and more here. Art enthusiasts have great galleries and studios to visit with new pieces throughout the year. Fredericksburg is home to the National Museum of Pacific War, which has been named one of the top five history museums in the US. If you’re fond of history, you will find exhibits on Pearl Harbor, the Doolitle Raid, and the Atomic  Bomb that are hosted in the museum quite exquisite.

Cost of living for retirees: 10.5% lower than the national average

The smaller town of Burnet has attracted golden-agers for several reasons. The population comprises 18% of seniors age 65 and older, making it a friendly community for retirees. It has excellent access to doctors and affordable healthcare. Burnet is also considered a safe town with a low crime rate. As for entertainment, the town has a lot to offer. Burnet features many attractions, such as Longhorn Cavern and State Park, the Highland Lakes Air Museum, and the Vanishing Texas River Cruise. If you’re a wine lover, you will be pleasantly surprised with the Texas Wine Trail. The place delivers a fantastic experience with wine tours, tasting, fun shopping, an unforgettable dining experience, and upscale lodging.

Cost of living for retirees: 15.7% lower than the national average

Aransas Pass is ideal if you’ve been dreaming of a coastal lifestyle when you retire. Warm weather and proximity to beaches along with excellent access to doctors make this a great place to retire. In addition, 19.2% of the population here are of retirement age. The city is located on the shore of Redfish Bay and therefore offers all kinds of water activities such as boating, kayaking, fishing and even duck hunting. If you enjoy hiking, the Lighthouse Lakes Trail opens a spectacular view you can admire on your walks. Aransas Pass offers a great variety of restaurants and diners to frequent. Finally, if you are fond of golf, Aransas Pass provides multiple golf courses to hit the links. Aransas Pass is called a “perfect retirement paradise” for a reason!

The state of Texas provides golden-agers with things that make their retirement enjoyable – year round warm weather, mild winter temperatures, low cost of living. However, there are many factors to consider before making a decision, such as house prices, taxes, crime rates, and healthcare.  Many places in Texas will provide you with all of these great features and more. Indeed, you can find everything here – from fishing to golfing, from restaurants to art galleries and museums, from recreational areas to wineries. Texas, one of the great states to retire in!

How confident are you on your retirement plan? Retiring in a place like Texas still requires you to ensure you have a good long-term plan in place to retire well.

Here at Oak Harvest, our Financial Advisors and Retirement Planners do more than just manage your investments. We build holistic retirement plans that aim to reduce risk, increase income and help you pay less tax – and we believe that’s what advisors should do!

If you are ready to take the next step, and talk to a team of retirement planners who put your interests first, Schedule a call today!