Broadly speaking, I am calling our second half 2019 outlook, “Goldilocks Returns: and She Kicks the Three Bears Out of the Party”.   You can listen to the special two-part podcast release of our second half outlook at the links above.  What follows in this, the official release of our outlook, is a “transcript” of those podcasts.

As we have repeatedly said throughout the second half of 2018 and first half of 2019, we see an almost perfect analogy in the economy and both the bond and stock markets to the 2015 through 2016 period for 2018-2019.  Our first half outlook can be found on our website at https://oakharvestfg.com/2019-first-half-outlook/.  So far so good, as the markets have done almost exactly what we laid out at the beginning of this year.

The investment team at Oak Harvest believes the second half 2019 returns will come largely during two very short time windows.  We believe that the first market rally already started on June 3rd as the market became overly pessimistic on both inflation and global growth.  This rally could extend into August and reach new all-time highs of close to 3000-3050 on the SP500.  Let’s call this the normal “summer rally”, during the very normal stock buyback window for second quarter earnings.

The second window of opportunity for a substantial up move in the second half would come after a fall selloff of up to 5% on disappointing 3rd quarter earnings reports in the normal “deadzone” period.  However, by November and December, long term investors will begin to focus on positioning for a 2020 economic upturn.  Let’s call this the normal Santa Claus rally which could propel the SP500 to close to 3100 by year end 2019.

As for Treasury yields, we feel that we are currently seeing the low in yields for long term Treasury yields and high in their prices for the next 18 months.  Why do we see this?

During the first week of June, the Federal Reserve “moonwalked” back its assessment on the economy and said it was open to rate cuts in the second half of 2019.  As you know, the team at Oak Harvest believes that 95%+ of financial news is noise, irrelevant, and merely written or produced to create emotion in its readers or listeners.  This story, for the second time this year, is different!  This one is market changing news just like the early January one when the Fed changed its wording.

One of the most sacred rules for macro investors is DON’T FIGHT the FEDERAL RESERVE!  Repeat after us…DON’T FIGHT the FED! or “DFF” for short.  There is a reason why the stock market went nowhere for 18 months!  The Federal Reserve was tightening conditions.  It has now said they will provide liquidity to the markets if needed.

The bond market has known since January 2018 that both inflation and growth peaked in that month on the implementation of the Trump Tax cuts.  Since then, the overall stock markets have gone nowhere for almost 18 months as both growth and inflation have cooled.  This slowdown has been caused by a combination of factors, but the main causes have been 1) the Fed tightening financial conditions throughout most of 2018 and 2) the Trump Tariff implementation against our trading partners negating the benefit of the early 2018 tax cuts.

The Federal Reserve controls the general monetary supply, and they control whether credit and money are easy or hard to come by.  Whether by desire or chance, by controlling credit they also have affected overall market volatility the last few years.  When credit conditions are easy (think of the second half of 2016 and 2017), volatility typically declines and very few legitimate buying opportunities surface. Contrary to most market pundits, except for a brief period in late June/pre-July 4th (potentially caused by disappointing Fed news, China currency concerns, and or poor China trade negotiations), and then again in fall in the 3rd quarter “deadzone”, we continue to expect a dramatic decline in market volatility in 2019 and even decline in volatility further in 2020.  This should help not only stabilize stocks but propel them back higher.  This is almost exactly what happened in the second half of 2016 through January of 2018.  During that time, contrary to most market strategist calls, the market experienced a trend of much lower, not higher, volatility.  However, please remember, these trends develop over months and quarters!  Not hours or days or weeks.

In early July, we expect two major trends to surface.  First, companies will exit the “deadzone and blackout window” and reenter their stock buyback periods.  This brings a big buyer of stocks back into the market.  Perhaps even more importantly, we see a second behind the scenes dynamic beginning.  With the sharp, sustained bond market rally and stocks going nowhere since January 2018, large pension funds find their portfolios drastically overweight fixed income exposure.  The team at Oak Harvest believes that come third quarter 2019 they will start reallocating money away from bonds and into stocks just as they did in late December of 2018 and early January 2019.  They were the first buyers of stocks in the late 2018 downturn; they should be the first buyers of stocks this summer.

Finally, as we look out to the second half of 2019, we see inflation expectations up ticking from depressed levels.  Why?  The Federal reserve wants higher trending inflation and tariffs lead to price increases which ultimately become inflationary.  Moreover, the Fed easing cycle playbook says that inflation first ticks up for one to two quarters after the Fed firsts signals easing.  This is good for stocks and bad for bonds.  A little farther down the road, 2 to 3 quarters out, growth picks up due to loser monetary policy.  Moreover, we expect President Trump to pivot back to focusing on domestic growth as he refocuses on getting re-elected in November of 2020.  This duality of rising inflation and rising growth, causing long bonds to sell-off, is the dynamic necessary for Goldilocks to return to the stock markets.

As we said we would do all year, we were buyers of stocks during the recent May pullback.  We bought more growth and cyclically tilted stocks for the second half of 2019 and 2020.   For now, our initial outlook for the second half of 2019 as well as 2020 is “Goldilocks Returns”.   An economy that has 1) the Federal Reserve accommodative, 2) both higher trending inflation and growth in the second half of 2019, and 3) accelerating economic growth into the second half of 2020 is Goldilocks.  Under this stable then accelerating economic scenario, the following assets outperform: smaller capitalization stocks, value and cyclical stocks, and stable growth stocks.  Under this stable then accelerating economic scenario, the following sectors outperform: technology, industrial, financial, and consumer discretionary.   What doesn’t outperform?  Utilities, staples, healthcare and safety investments like US Treasury bonds.  What do they have in common?  They are the low volatility, “safety” sectors that investors have flocked to and have outperformed since the economy peaked in January 2018.

Given that the broad stock market has gone nowhere for 18 months, we wanted to give our readers a glimpse into our outlook beyond 2019.  Our early, first look, gaze into our 2020 “crystal ball” follows. (As a reminder, this a very early outlook and is subject to change!)

The dynamic of both higher trending inflation combined with higher growth is something I want to call “GoGo-dilocks”.  The combination of these elements and an easier Federal Reserve which LOWERS market volatility would lead to significant positive earnings revisions as well as P/E and valuation expansion upward throughout 2020.  This dynamic could generate an SP500 of 3550-3600 into a business-friendly Trump reelection in late November 2020. This kind of economic environment and stock market move is “GoGo-dilocks”.

Should President Trump win re-election convincingly, Oak Harvest would expect a true “melt-up” move in late November of 2020 into the January 2021 inaugural ball.  This upside move in the SP500 could be similar in size to the Trump Tax plan “melt-up” move experienced in December 2017 through late January 2018.   A similar “blow-off” move occurring in the 4th quarter 2020 would project a SP500 of close to 4000 into late January 2021.  This optimistic upside scenario for 2020 is “Goldilocks”, followed by GoGo-dilocks, punctuated with a “melt up” exclamation point.  This optimistic outcome is by no means guaranteed nor is it conventional wisdom.  However, we wanted to present it as a potential optimistic outcome, wholly opposite the “guess the next recession”, the “sky is falling”, the “we are going to crash 50%” crowd that has been helpless and futile in their preaching and selling of fear-based investing for the past 10 years.

I do want to lay out the logic behind the ultra-bear, negative, the sky-is falling scenario, I will call it the “No-go-dilocks”.  This is how that negative feedback loop scenario could (I emphasis could!) play out in 2020.  Its logic is as follows: the global economy is already in recession due to a combination of federal reserve interest rate increases in 2018 and Trump tariffs which are tax hikes.  The world has taken on too much debt and cannot grow.  The global easing policies of central banks which have just begun will have no effect on stimulating the global economy for the second half of 2019 and 2020.  In other words, the four most dangerous words in investing will finally ring true, “this time it’s different!”.

In the 2020 Presidential election period, we would see the far-left side of the Democratic party, the “progressive arm, which somehow has become todays politically correct term for “liberal”, or worse yet socialist wing, gaining ground in the upcoming election.  Capital investment and consumer spending would grind to a halt in 2020 in front of the election.  If President Trump were woefully behind in the polls in the first half of 2020, and he got desperate, maybe he throws in the towel and relaunches tariffs against China or an attack on the Middle East.  If these extreme outcomes become more likely, the economy would sniff out a recession coming in 2021 and the stock market could fall 30% from this summer’s highs over the next 18 months. This negative 30% return is the normal recession peak to trough stock market return.  Ironically, that would put the markets back to a level almost exactly at the levels that President Trump was elected in November of 2016, between 2100 and 2200 on the SP500.  I note that this is about 10% below the markets lows last December 2018 Christmas eve.  That’s the negative case for the stock market the next 18 months.  At this time, the team at Oak Harvest believes that this ultra-bear case has a slim chance of happening.

I want to remind readers that the investment team at Oak Harvest is constantly evaluating our economic outlook and adjusting your portfolios as we see opportunity and valuation anomalies.  Regardless of what we feel “might” or “should” happen, we manage your money for your financial goals and needs, and we adjust portfolios for what is actually happening in the economy and the markets.    At Oak Harvest, we look for value when others are fearful.  Moreover, we accelerate investments when other investors emotions and panic causes short term volatility.

This concludes our second half 2019 outlook and lays out for the first time, the “extreme” outcomes that might playout during the 2020 Presidential campaign year.

Sources for data include Bloomberg, Investor’s Business Daily, other publicly available news sources, and Oak Harvest internal analysis. This forecast contains the views of Oak Harvest Investment Services and should not be considered personalized investment advice. Not an offer or solicitation to buy or sell securities. No assurance is made that Oak Harvest Investment Services will continue to hold the views expressed herein. Views and opinions may change based on new information, analysis, or reconsideration.  In addition, Oak Harvest makes no assurance as to the accuracy of any forecast or projection made. Past performance is not indicative of future results. Investing involves the risk of loss. 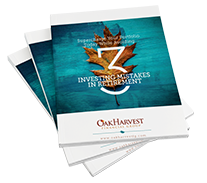 Concerned about how market activity could affect your retirement? Get the latest market updates!

Join us for an upcoming educational event to better prepare for your financial future.